Get discovered by employers. Create your
job seeker profile and resume today!

Why RN's Should Pursue a Bachelor's Degree 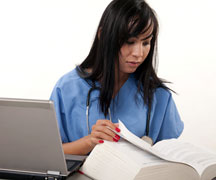 Job opportunities are strong nationally for registered nurses who only hold an associate’s degree. So why does it make sense for many nurses to return to school, and for aspiring nurses to stay in school until they earn a bachelor's degree? Many reasons, with money at the top of the list.

A BSN program is more in-depth than any other registered nursing training curricula, and can include courses on theory, as well as such business issues as human resources and office management. Having the degree translates into a $5,000 increase in your median salary, according to a report conducted by the state of California. While that may not seem like a lot, consider that it would average $100,000 more over the latter 20 years of a 40-year career. And keep in mind that these numbers don't account for positions requiring advanced degrees that require a BSN as a pre-requisite.

The upshot of more extensive training is that nurses with BSNs can find more advanced career options faster. For example, you might find it relatively easy to become a manager of other nurses, or even move toward specializations in anesthesia or becoming a nurse practitioner.

The Push for RN's with a Bachelor's Degree

The value of an associate’s degree in many sectors has fallen, especially with the ease of earning a bachelor's degree from state schools and universities. But there is also a push by thought leaders in nursing to minimize the number of nurses with just a two-year degree.

The Institute of Medicine, a subset of the National Academy of Sciences, wants to increase the percentage of nurses with a bachelor's degree from 50% to 80% over the next eight years. Since this think tank has contacts in the government and in the private sector, expect to see greater workplace incentives for those with more experience.

Nurses are used to continuing education as a part of maintaining their licensing. But you might not realize that many organizations offer subsidies, if not outright tuition reimbursement, for returning to school. This can significantly defray the cost of courses and is worth investigating. Even if it's not mentioned in your contract, your employer may offer assistance if you ask for it.

The other benefit of major organizations calling for more graduates with bachelor's of science degrees in nursing is that schools recognize the opportunity for accelerated programs. If you don't have to go to school for more than three or four semesters, it's easier to fit that into your schedule.

Who Shouldn't Get An Advanced Degree in Nursing?

There are certain groups of nurses who might not benefit from earning a bachelor's degree from an economical sense. One group are those with 10 years or less to go until retirement. According to the College Board, the average in-state tuition for a state school is about $8,000 a semester, and accelerated programs would then cost $12,000 to $16,000, plus any associated lab fees and costs for textbooks. You might find that the salary increase you can expect for another eight to 10 years of working makes it a less viable option.

Others may simply not want to move into management, and would rather focus on patient care and enjoy their work as it is. Whether or not it's the right fit for you depends on your career goals, your budget and employer's generosity. But greater hiring demand is already developing for BSN graduates, and as in other health-care sectors, the gap in potential jobs for those with four-year degrees is only likely to grow more.

NursingJobsPlus.com is a network of specialty nursing career websites offering unique classified and advertising opportunities to recruiters and advertisers in nursing and related fields.

The National Association of Worksite Health Centers (NAWHC) is a Chicago-based, trade organization focused on assisting public and private employers, unions and other sponsors of worksite health programs in getting the greatest return from their onsite employer health centers, onsite pharmacies, worksite fitness and wellness centers.

NAWHC also provides opportunities for those vendors, suppliers and consultants that support worksite health facilities and programs to interact with and learn about employers who offer onsite clinics.

HealthProfessionsJobsPlus.com is a part of the HealthJobsPlus network of clinical career websites offering unique classified and advertising opportunities to health care recruiters and advertisers in nursing, medicine and allied health services.

The Oklahoma Nurses Association is the professional association for all registered nurses in Oklahoma. We work as a community of professional nurses across all specialties and practice settings.

Thousands of jobs from a variety of niches.

The Best Jobs and How to Get Them

The cutting-edge book that finds you the best jobs & highest incomes.